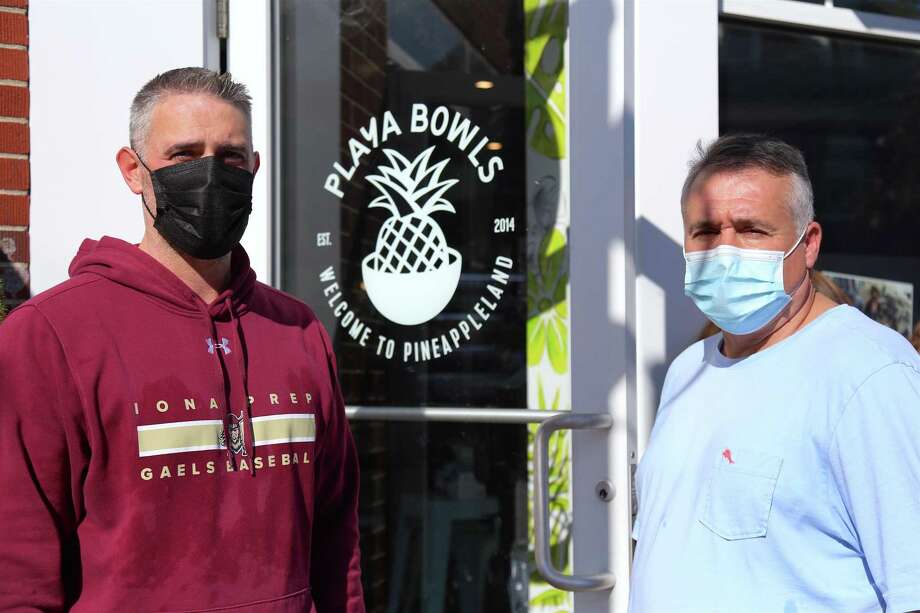 DARIEN — A fresh food alternative appears to have found a happy home in Darien.

A new franchise of Playa Bowls opened at 1029 Boston Post Road this weekend. Given the long lines of happy customers, it appears it’ll be a healthy success.

The restaurant offers fresh juices, smoothies and a variety of “bowls” based around oatmeal, pitaya, acai, chia and other healthy options served in plant-based plasticware.

“This happens to be the company’s 100th store,” said Dimovski, who is co-partners with Jarrod Jackette.

“We have another store in Fairfield,” he said, which was the first to open in Connecticut.

The two were longtime neighbors in Westchester County, as well as co-coaches on their sons’ Little League team, before they decided to try this business venture.

After individually being involved the Playa Bowls company in freelance finance and design capacities, they heeded suggestions from its founders to become permanently involved through a store of their own.

“The thing that we liked about it is the vibe, the fun quality of it,” Dimovski said. “And the product is the best you can make.”

Two New Jersey shore surfers began the business six years ago after being struck by the similar food and beverage offerings in warm-climate communities they visited on surf trips, including acai and pitaya bowls.

They began with a pop-up stand on the sidewalk outside a local pizza shop in New Jersey and grew from there with an added focus on sustainability.

“I think it’s a good fit,” Jackette said of the new Darien location, “because I think this town is health-conscious and active.”

“If I’m correct, I believe there are more kids playing youth sports here than in any town in the state,” he said, noting their target demographic among young people.

“Thirteen to 21 is our main target, but the older crowd is coming in now and sharing bowls with their grandchildren,” Dimovski said, noting the growth of their Fairfield store.

The idea to open in Darien began in early spring, Jackette said.

“We were a little nervous when the pandemic first hit,” he said, but ultimately the restrictions did little to slow business in Fairfield.

“We didn’t see any reason to pump the brakes in Darien,” he said, acknowledging the encouragement of landlord David Genovese, who first approached them with the idea of opening the store here.

“Darien was on our radar, (but) he made this possible,” Jackette said.

Several people visiting the store on Sunday expressed pleasure with its offerings.

“It’s nice to see all the hard work pay off,” Jackette said, “and people come out to enjoy the product.”